Innovating A Dual-Use Technology To Do Good In The World 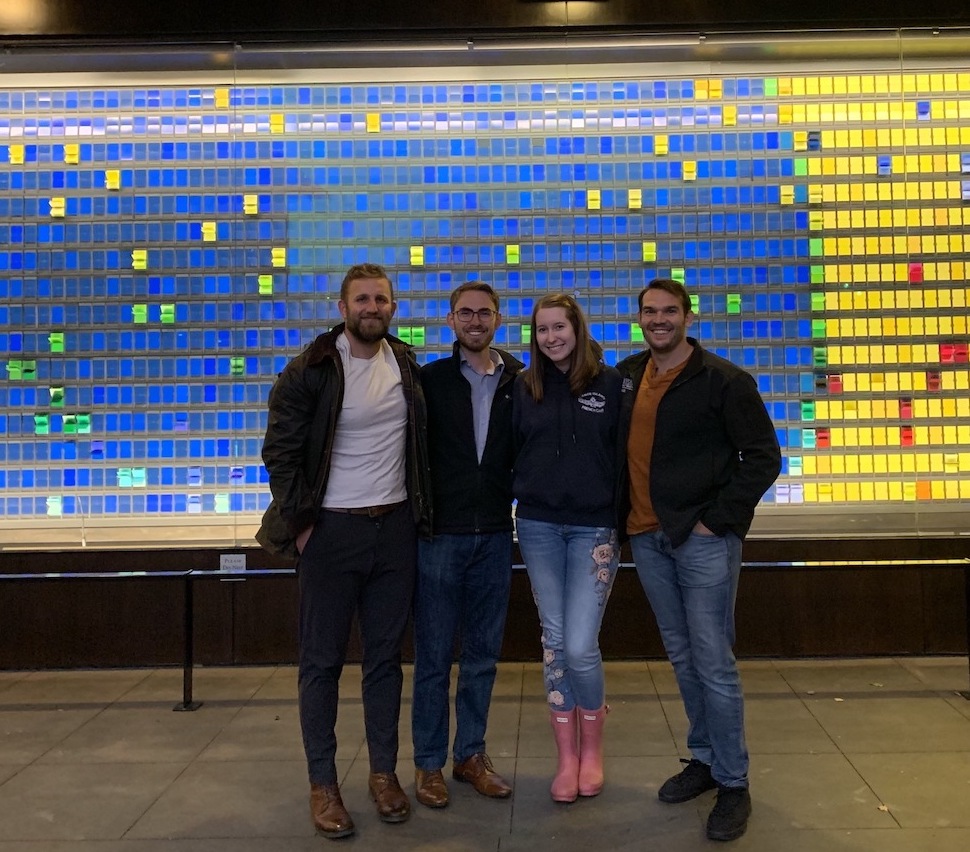 This is one in an occasional series looking at the journeys of startup teams that have worked with BMNT's enterprise accelerator, H4XLabs.

During the wars in Iraq and Afghanistan, some of the fastest-evolving technologies consisted of drones and UAVs, giving military personnel eyes in the sky in unforeseen ways. Forbes recently suggested that the greatest legacy of Afghanistan will be drone warfare. Drones, however, still have a long way to go to meet emerging requirements in battle, and as one startup team has learned, the results of further technological advancement could also benefit a number of other industries.

Travis Anderson, Caleb Stenholm, Liana Keesing and Andrew Dallas joined Stanford’s Hacking 4 Defense® course compelled by a shared passion for solving hard problems in the defense industry, and, for two of them, having come from a military background. In the class, Army Research Labs provided the team with a challenge to solve what had become a significant setback in drone communications: ARL sought to improve their understanding of regional dangers by devising a way for multiple drones to communicate with one another through a single platform. During early discussions, the team channeled their own military experience along with detailed interviews with the customer to eventually understand that the solution to the challenge would be different than ARL initially envisioned. The solution, in the minds of the team, would mean redesigning sensors with new capabilities that would bring innovative dimensions to the entire industry, and thus gain them entry into a number of commercial markets.

At the close of the spring semester, realizing that they were on the brink of developing a technology that could answer the needs of the Army in a way no one had imagined, the team decided to launch their startup, Offset AI. They spent the summer working with H4XLabs to identify dual-use cases for their technology and continue to build their company.

The shift from classroom to battlefield, and beyond

The team was struck by the momentum shift between taking a course for college credit and devising a dual-use capability that would modernize drone technology. This reality made it more intense and interesting for each member of the team.

“During certain more general college classes, you may end up focusing on some material that doesn’t necessarily bring you value. Your motivation is about getting a good grade. But in H4D and H4XLabs, we became so excited and motivated about this work. We were asking ourselves, ‘What do we really have to focus on?’ ‘What do our customers care about?’ and ‘What will bring us the most value?’ That was such a powerful mentality switch,” said Anderson.

“Normally when someone is building a company, they hope to make money or have some other growth-minded goal. They try to make customers notice them and buy into their business. But with the work within H4D and H4XL, we noticed that people were cheering for us. They wanted us to succeed because we are going to hopefully make the country safer. We are building something that is, in the end, in everyone’s best interest, and that is one of the coolest things about this entire community,” he added.

For Offset AI, the solution to ARL’s problem was to adopt a swarm theory among small, ultra-light sensors controlled through one optimal platform that could be accessed by multiple people within the squadron or command. The team plans to call this technology “Silknet”. They developed the concept for lightweight, golf-ball-sized sensors that could be easily carried by the user, and operated, deployed and managed simply. The sensors will provide detailed information about surroundings, whether they be targets, threats, or environmental concerns. The idea is to be able to throw or position the sensors in multiple locations around an area to survey, and, with a push of a button, have them connect and communicate on a platform to show the context and bigger picture of the situation.

While drones are the popular choice among the military, Offset AI knew the available technology presented size and infrastructure limitations, including short flight time, cost inefficiencies, time spent in recovery of downed drones, susceptibility to jamming and poor weather/environment conditions, wasted time dedicated to operating the drone and their bulky size and weight. Additionally, the team had experienced that in city-based conflicts, traditional drones gave away their signature and location, giving the enemy a potentially deadly upper hand. In conducting interviews to build the initial prototype, the team saw an opportunity to innovate

“We realized that now is the time. The technology is at a point where we could create low-cost expendable sensors, with small, long-lasting batteries using minimal power to get optimal output. We also knew we could leverage emerging technologies with meshed networks and semiconductors that are getting smaller and smaller,” the team explained.

To some extent, their time in H4XLabs provided Offset AI the same kind of eye-in-the-sky oversight for their business idea that they hoped to accomplish for military operations. They said the added benefit of having experienced mentors with whom to share ideas and gain business insights was invaluable. The team was able to expand their thinking and put themselves beyond the Defense mindset. Among their greatest insights were a better understanding of potential competitors and identification of previously unacknowledged commercial opportunities for their product. The team explained that during H4D, they hadn’t considered any dual uses for their technology. However, working with H4XLabs, they discovered a key opportunity in transferring their technology to the agriculture industry. Farmers face similar problems to military operators, as they lack automated real-time data collection necessary to make important decisions. In addition, they unearthed potential for growth through monitoring wilderness landscapes for wildfires or other devastating events.

“If we hadn’t had that mentorship, we would have probably gone in a hundred different directions. H4XLabs helped us direct our ideas and gain new opportunities. We thought bigger. We spoke with people who weren’t connected to the DoD and our eyes were opened to these many different ways to use the technology, “ said Anderson.

“The potential is huge. We can do a lot of good for the world.”

Continue Reading
Insight
What I Wish Someone Had Told Me Then: Creating Innovation In Public Sector Organizations
Continue reading